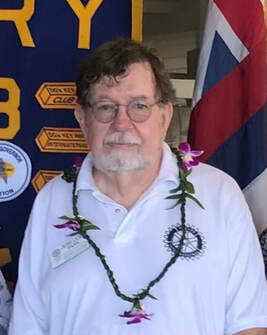 Joe Park is currently the Vice President of The West Maui Taxpayers Association and has served as President of the Rotary Club of Lahaina for 2020/2021 and again this year for the 2021/2022 term.

“Upon my retirement from federal service, after 42 + years, and relocating to Maui, I wanted to continue my involvement in the community and quickly determined that WMTA and Rotary were the best ways to do that.”

After multiple assignments around the world, Joe and his family came to Honolulu, where for the last 16 years of his career, he served as the Director, Family Housing Department, Marine Corps Base Hawaii in Kaneohe Bay.   As such he was responsible for the operation and maintenance of the government’s 2500 + family housing units.   Then is 2005 the Marine Corps began privatizing its housing inventory and he shifted from management to a contracting officer type position.  For the last 10 years of his career,  he oversaw the replacement of 1500 plus homes, and the operation, management, and maintenance of the Base’s family housing inventory at a total development cost of nearly a billion dollars.
​
At the time of his retirement in 2015, he was one of two government representatives ( one Marine Corps & one Navy) on the Board of Directors of “Hawaii Military Communities”, which was the private entity responsible for all Marine Corps / Navy Family Housing on Oahu.
Back to Board of Directors
Copyright © 2021