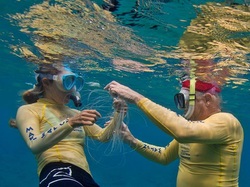 My name is John Seebart. I was born here on Maui and lived the first few years of my life on Front Street, in Haole Camp, now called Shark Pit. My parents came to Maui in 1936 where my father taught at Lahainaluna. Before WWII he went to work for Pioneer Mill, to run their federally mandated food crops program.

In 1952 we returned to the mainland where I went to school. After high school I served in the U. S. Marine Corps for 4 years, two years in Saigon at the American Embassy.

I was Honorably Discharged in 1970 as a sergeant and started college. I received an AA degree in Economics in 1972 from El Camino College. I then transferred to University of California at Berkeley. I left school a year later and started working. I started a business, but later went to work for the Long Beach Fire Dept. During my time on the fire department I earned another AA degree in Fire Science.

On the fire department, I worked as a Firefighter, Paramedic, and Captain, for a combined total of 26 years. I retired in 2002 after 13 years as a Captain. I purchased my home here, and moved back starting in 2002.

Since returning, I have been involved as a volunteer with The Department of Aquatic Resources, DAR, doing underwater surveys. Subsequently, and from the outset of the program, I have been a volunteer with Kaanapali Makai Watch, a program supported by the State through the sponsorship of the Department of Aquatic Resources as well as C.O.R.A.L., a non-profit organization.  My principle involvement in Makai Watch is outreach and education, in the water and on the beach. We interface with fishermen and visitors of all backgrounds, trying to increase knowledge of the Kahekili Herbivore Fish Management Area, KHFMA.

The KHFMA is the first of its kind in the world. The reef cleaning herbivores are all protected in the area. The hope is that with this protection the reef will survive.

About three years ago I started a group called the sLower Road. I live on the Lower Honoapiilani Rd, "the Lower Rd" and we have had a problem with speeding on the road. It is our goal to promote safety on the road. This goal has two main facets. First is proactively controlling traffic speeds in our neighborhood. Second is working with the County on the Lower Honoapiilani Phase IV Road Improvement Project. Our goal on the latter is to get a better road, not a bigger road.

We have been working through NPAC with Dan Burden and The Maui County Public Works and Planning Departments on this goal of a safer road.  A road where the design of the road itself helps to control traffic speed and safety in our neighborhood. NPAC is The Nutrition and Physical Activities Coalition to whom we are very thankful for their work and the introduction to Dan Burden. Dan is a nationally recognized expert on 'walkable bikeable" streets, "safe routes to school" and "Complete Streets".

I became involved with WMTA to forward these goals, specifically, and to see a better future for West Maui, where I started out, and plan to stay.

I have also worked with The West Maui Ridge2Reef Watershed project, Kahana Moku, of the Aha Moku Council, Save Honolua coalition, Kumuwai, and was involved in the "injection well" debates.

I consider Lahaina my hometown and feel a sense of responsibility and place here.
Back to Board of Directors
Copyright © 2021